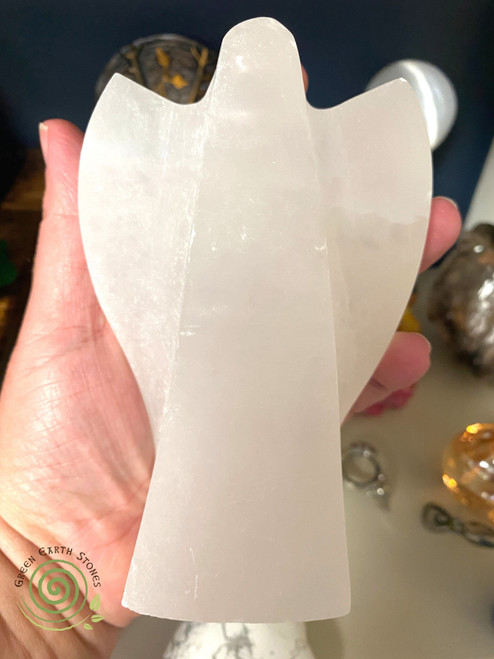 The word "Angel" is derived from the ancient Greek angelos, meaning messenger. "Angel" in Biblical Hebrew is mal'ak, again its main meaning is "messenger". In many religions such as Christianity, Judaism and Islam, it is believed that between God and mankind there are intermediary beings, called angels, they are a bridge between Heaven and Earth, channeling God's love for us. Crystal Angels are a way to be reminded of God's love for us throughout the day.

It is believed that selenite is powerful enough to clear negative energies and to reprogram all your crystals. It is said to help in expanding your awareness and contacting your Spiritual Guides and Angels. It is also believed to help enter the dream realm and aid with intuition and to enter a meditative state. They are said to have a fine vibration that brings mental clarity while dispelling confusion allowing you to see the bigger picture. Selenite is often placed in every corner of the home to promote a peaceful environment while keeping negative influences at bay. Selenite is named for Selene, an ancient Moon goddess. Exchanged between lovers, it will bring about reconciliation.